If you’ve been keeping up with my blog, you’ll know that during my childhood in the 70’s and 80’s, my parents grasped all the modern ways they could afford. This included what we then called technology but what we now call ancient!

First of all there was a telephone. Not just any telephone… a Trim phone. If you were there, you are now thinking about that very special and very modern, very unique ringing sound it made! It was tethered to the wall, there was only one which we all shared and it was a ‘party line’. My husband is a couple of years younger than me and when I explained this concept to him a couple of years ago, he basically thought I was winding him up. For those of you who weren’t around or can’t remember, at that time there were not enough phone lines for every home, so you had to share. This inevitably led to listening to other people’s conversations and a few other issues but they are best forgotten. Not everyone had a telephone and very often the neighbours would pop in, ask to make a quick call and offer my Mum 10p for the pleasure. How things have changed!

Every week we would all jump in the car and take an evening trip to the local hyper market ( Carrefour as it was otherwise known). We would park, collect a trolley, park the trolley inside and then head up to the restaurant. What a treat! Some weeks it would be Chinese night and I would leave with a few sets of chopsticks – I bet my Mum and Dad still have a few pairs of them kicking around. Anyway, I mention Carrefour not only because it was the super modern way to shop but it was also where Mum and Dad purchased the technology of the day. As we set off in the car for the weekly adventure, you never knew how it would end!

The first big purchase I can remember was a stereo cassette radio. Oh my word! It was big and black and sort of ghetto blaster style. It was amazing! Mum bought a tape of their current favourite and a set of blanks. A new Sunday night tradition was born in that very moment – Taping the charts! How amazing was that? Now we could listen to the charts when ever and how many times we wished. Talk about a game changer! 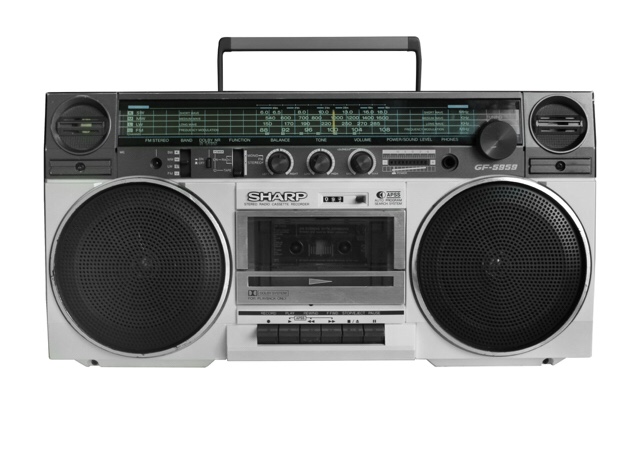 Next, Mum wanted a microwave oven. The hyper market obliged. If I’m honest, it was a strange time for us. Bacon was just weird and suddenly lasagne (pasta but not in a tin – one of my favourite quotes there. Gold star if you get it) changed shape – now it was round not oblong- and it was more errr…. wet than it had ever been before. The ‘micro’ came with a huge, hard backed cookbook and Mum seemed determined we should eat as many of those recipes as possible no matter how weird or soggy they seemed. 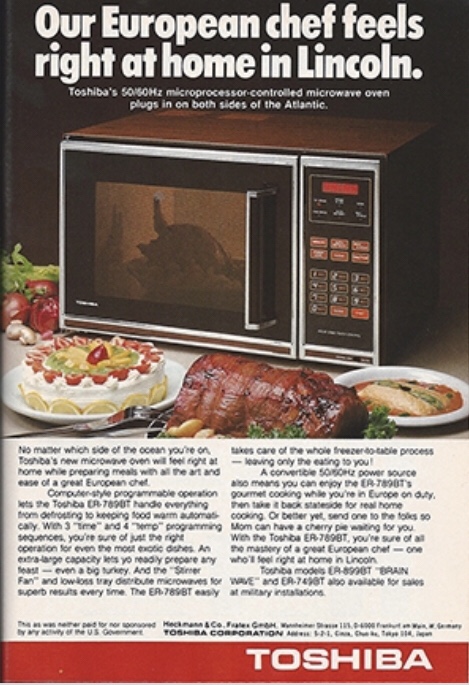 Safe to say, Toshiba can take a fair bit of responsibility for some of the very odd shaped food of my childhood

What ever next, I hear you cry… Here’s the answer – a VHS player. Goodness me. More tapes but this time, much bigger. Again, you could buy your favourites pre-recorded (of which we had many) and blanks. Now you could set the timer, go out, record your favourite program and watch it at your convenience whenever and how ever many times you wished… as long as the program actually started and ended at the allotted time. If it didn’t, life became a bit more tricky but it was a revolution none the less. Soon a new sort of shop/library appeared in the high street – The video shop! Brilliant! Saturday nights were transformed – not only did we have the Chinese takeaway but it was followed by a film completely of our choosing. Life seemed pretty epic at that point in history!

So how does all this compare to today?

First, we avoid huge supermarkets like the plague. We opt for small, local shops with good produce.

Telephones, well that’s changed a bit! Can you imagine being tethered to a wall, sharing with the whole family and not being able to send text messages or photos? Now, that does sound like madness!

As far as music is concerned there is no longer the complex move of hitting play and record simultaneously, we simply ask Alexa politely and she plays us anything we want to listen to, when ever we want to listen to it and for as many times as we desire.

Microwaves are the next point and that’s a quick answer- we don’t have one. We made the decision quite a few years ago that getting the molecules of your food juggled and their form changed just to save a couple of minutes, simply wasn’t worth it and we’d rather the extra worktop space. The microwave was no more. We don’t miss it at all. I think we are the only people I know without one and life is absolutely fine!

Lastly, films. No more paying a fine because you forgot to take the video back the next day. These days we have iPlayer for every tv channel we watch, plus Netflix and Amazon Prime. If there is an issue, it’s having too much choice. Part of me would like to go back to the days of three channels. I remember the start of channel 4 being super exciting! Can you imagine that?

So that’s the progress over my life so far – just over 40 years. Talk about tomorrow’s world, today.

It leaves one burning question. How much CAN life change in the next 40? Answers on a postcard please!

If you are still wondering about that quote, it’s The tent, the bucket and me by Emma Kennedy -also made into a six episode series comedy by the BBC called ‘The Kennedys’. Well worth a watch on your fancy, digital streaming tv!

Life in a 1980’s build square box with 1 x husband, 2 x puddycats & 3 x businesses. Yes, you read that correctly... THREE! Founder of #InstaHomesofWales Usually found @ceinioghome or beside the seaside 🏴󠁧󠁢󠁷󠁬󠁳󠁿 View all posts by ceinioghome